In my past posts, I have described the prevailing climate as a buyer’s market, but my experience in 2015 has coloured my view slightly. To be more precise, we are in a negotiator’s market- there are bargains to be struck, but they’re not screaming out for takers like a bargain basement store. There is still a pricing gap between buyer and seller expectations at this point in time, but increasingly, I’m finding it possible to use non-price bargaining chips to persuade a seller into inking the deal.

I’m going to share some personal experiences culled from deals I closed in the past few months, but as my blog is a very public resource and I represented mostly buyer clients in these deals (some of which are still pending legal completion, in fact two were exercised just before the Jubilee weekend) I am not at liberty to disclose in quite as much detail as my earlier post on Record Sale Case Studies which were completed trades where I represented solely sellers.

“The ABSD Conundrum” – how to work it in your favour! As you likely already know, ABSD (or Additional Buyer’s Stamp Duties) refers to the additional stamp duties payable by buyers, rates depending on residency status and count of residential properties owned. Besides adding to the cost incurred by local investors and foreign home buyers here, it presents a sticky situation for those seeking to upgrade (or downgrade) their homes, as they will need to either time their home sale and next purchase very neatly, or consider selling and then renting till they buy their next home in order to avoid incurring ABSD on their next home purchase. This logistical nightmare is further complicated by current home loan restrictions, which make it hard for buyers to get maximum financing on their new home if they have yet to sell and discharge the mortgage over their old home. The good news is that this potential stumbling block can be leveraged upon if you’re a buyer who has time on his side. (Another reason why you should not hold off home purchase decisions till the last minute!)

In fact, three of the resale deals I closed in 2015 so far involved using this tactic – crafting an offer that provides a solution to this issue for the seller – purchase with leaseback by seller. In simple terms, it allows the seller to get his sales proceeds and redeem his first home loan upon legal completion of the sale, but continue living in the property for an agreed period and rental rate while the logistics of his next home are being ironed out –  typically sourcing for that next home, securing the deal, obtaining financing, awaiting legal completion, and then renovations if necessary. In the first such case, which I shall call Duchess-3A, we managed to deal at almost 8% below the seller’s list price (despite his asking price at the time being a good $100K lower than all but one other 3-bedroom units listed for sale at the development, and the property being in great condition), because we were able to offer a 6-month leaseback period after completion. In the second such deal (Cashew-3A), I represented the seller, and my client eventually agreed to an offer slightly below our last received offer because the buyer was willing to grant an extended rent-free period to her. And in my most recent case involving post-completion stay (Duchess-2A), my purchaser client was able to knock off slightly more than 8% from the seller’s asking price, in part due to our willingness to extend a 3-month rent-free period to the seller. This was in spite of the unit already being advertised at valuation, and a good 10% below what the closest competing unit was asking.

Now, if you’re looking to use this strategy, there are several permutations and ways of going about it depending on the circumstances of the case. I was recently referred to a landlord, who purchased a property on his own some six months prior to our introduction. He too, had bought with a lease-back arrangement from the seller. Unfortunately, without proper advice, he had taken the option of purchasing with a one year leaseback arrangement. The seller had agreed to rent the property for a year post-completion, at a rate slightly above market, and the buyer had agreed to the purchase price with this in mind. After half a year, the seller decided to unilaterally terminate the leaseback agreement. To make matters worse, there was no form of security taken by the buyer, to ensure that the seller then held up to his end of the bargain. He would have been far better off getting an outright discount on the purchase price.

There is more to be said about how leaseback terms and conditions should be drafted, but perhaps I shall leave that for a separate discussion on how to negotiate contractual terms in a manner that covers your legal bases while ensuring the deal actually goes through.

Here’s something new- don’t be an ass! Fortunately I don’t encounter these too often, but such folks are definitely out there- the buyers who think that they can push down the price by being aggressively critical. This is in fact the worst possible thing you can do if the seller is present during the viewing. I recall a viewing I did earlier this year (For the aforementioned Cashew-3A), where a group of sisters came to view during an open house I was conducting. One particularly obnoxious member of the group took it upon herself to scoff at everything she came across in the apartment – it got to the point where she even made a rude remark about the owner’s choice of fridge. As soon as the party was out the door, my poor client turned to me and said, “I do not want to sell my home to them.”

Remember the Aesop’s fable about the North Wind and the Sun? You as a buyer are far more likely to get the seller to shed his metaphorical coat with persuasive charm rather than brute force. When a seller likes a buyer and knows that they genuinely appreciate their home, they will try their best to make things work for them. I think this is general human behaviour – we all hope our old belongings go to good owners, particularly a treasured home full of personal memories.

A resale deal I did in early July (Wilby-3A) is a perfect example of this phenomenon in action. The seller’s expected price was way above what my client was willing and able to pay. And here’s another reason why it often helps to have a middle man – it avails you of the “good cop, bad cop” psychological tactic. While my buyer was her usual charming self and candidly let the seller know she absolutely loved the house, I was the hard-nosed, calculative advisor who crunched the numbers and gave the seller examples of other available options that made better financial sense for my buyer.

Happily, we were able to reach an agreement that both parties were happy to settle for, but to do this, we worked not just on price, but also the funding arrangements. (The seller even shared with me that the price we finally agreed upon was lower than an earlier offer she had received- from a buyer whom she didn’t like, because they bargained aggressively and showed little appreciation for her lovely home.) I negotiated for an extended completion period to allow my client sufficient time for overseas funds to come in, and we sweetened the deal for the seller by releasing a slightly larger deposit. I also successfully used this strategy to benefit my own seller client in another sale earlier this month (OneTree-3A).

Typically the first 1% option fee goes direct to a seller, while the balance 4% deposit is held by the seller’s lawyers. If you do wish to try offering deposit to be released direct to seller, you need to know what you’re doing- this can potentially go very wrong for the buyer, for instance if the seller becomes a bankrupt during the period between exercise of Option and legal completion, or the balance sales proceeds are insufficient to cover the outstanding loan. Only use this tactic if you are professionally advised and have proper assurances on the seller’s financial standing.

There’s much misunderstanding about what constitutes good negotiation/ a good negotiator. Often, people imagine a no-nonsense tough guy like Samuel L. Jackson’s character in The Negotiator, but the truth is, when we’re dealing with sentimental and financially sound home owners, you need to have a good balance of hard and soft to persuade them into selling below their initial price expectations. 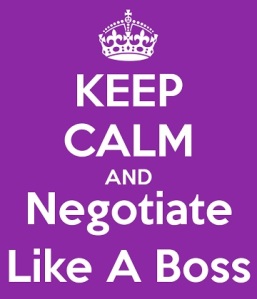 And the skill every good negotiator should know – when to stop!
A good negotiator isn’t one who simply bulldozes his way ahead, you need to know the value of what you are bargaining for, and when you should quickly grab the offer on the table. This was the case for three of the 2015 deals I closed so far.

The first was for a 3-bedroom in the Duchess area (Duchess-3B), which was asking for below $1,300 psf. All other similar units in the development were asking for far higher prices, and being familiar with the area (my buyer had been eyeing that particular project for months even before we met!) we knew that there were many buyers seeking homes at that condo. After bringing in our contractors to determine that there was no major plumbing and rewiring work necessary, we quickly sealed the deal.

About a month after this deal, I brought a buyer client to view a nicely renovated 3-bedroom apartment nearby (Adam-3A), which was receiving exceptional response from prospective buyers, with several second-time viewers the same weekend that my clients and I viewed. The last offer was $50,000 from the asking price, and we knew that a ready Option had been pre-signed by the sellers for $30,000 above the last offer. My buyers were decisive and quickly matched the inked price that very night, securing a prime freehold property for under $1.6M.

And my most recent such case was for a 2-bedroom unit (Jellicoe-2A). Thanks to insider news, we already knew the details of a recent low floor transaction at the project, and the response for this high-floor unit in the very first week of marketing had been overwhelming, with several groups viewing almost every day. An offer had come in just 3 days into marketing, with the seller counter-offering slightly above this offer. We were also aware that high floor 2-bedders at this project hardly ever came up – once in 2014, and none in the whole of 2013. Needless to say, we quickly scooped up the deal.

Wrapping Up…
In closing, I’d like to remind readers not to take any particular example I’ve listed above in isolation, for one thing, it was not possible for me to share that much background information on each case due to client confidentiality concerns. Note that it is important to take a holistic approach when dealing with resale properties – assess the unit, the development, the area, know your position (and ideally the seller’s position as far as possible) to determine what is a realistic and best outcome you can craft for yourself as buyer, or your client if you’re an agent like me. Happy negotiating!