Let me start by stating upfront that my agency SLP is one of the joint marketing agents for this project, thus it would be improper for me to voice overly critical views on Stratum. Happily for me, after studying the marketing information provided to agents and conducted my own independent research, I have to say I’m suitably impressed and feel I’m able air my opinions here without fear of offending the developers. As I believe there’s sufficient marketing material available to readers, I shall be sharing my own personal viewpoints here, so excuse the semi-casual tone of this piece.

When assessing a real estate target, my usual practice is to start with rental yields as leading indicators for future price movement. I was heartened to see that based on 2012 Q4 rental data, projects around the area like Livia and Ris Grandeur both enjoyed a healthy 3.9%p.a. gross yield.

Bearing in mind that there are several residential projects underway, one would be concerned about new supplies putting downward pressure on the rental yields. However, my sense is that this is a neighbourhood with relatively high owner-occupancy rates, thus the supply of units available for rent should form a low percentage of the total number of units coming online over the next few years.

The numbers appear to support my hypothesis. Thanks to the good folks at squarefoot.com.sg, I was able to determine that there were a total of 43 rental contracts concluded at Ris Grandeur in the year 2012. Assuming that most units are leased for 2-year periods, and that the average number of rentals concluded each year is fairly stable, I estimate that roughly 86 or so units at the 453-unit Ris Grandeur are likely to be investor units, a low 20% of the total number of homes there. And of course, with the Additional Buyers Stamp Duty introduced since 7 December 2011 and further increased on 11 January 2013, the percentage of investor owners of upcoming projects in the vicinity is likely to remain low. I don’t expect rentals to be too badly affected by the supplies of new units coming online over the next few years, as the bulk are being bought by end-users.

Next, let’s talk about the surrounding amenities. Stratum will be within 800 metres of Pasir Ris MRT, close to the upcoming Downtown Line MRT and Pasir Ris bus interchange, and also enjoy access to Tampines Expressway (TPE), Kallang Paya Lebar Expressway (KPE) and Pan Island Expressway (PIE). Besides having all major modes of transportation covered, residents will also enjoy the convenience of Elias Mall just across the road, and Downtown East, White Sands Shopping Centre, IKEA Tampines, Courts Megastore and Giant all within the neighbourhood. The real draw for me would be the 5-minute stroll to Pasir Ris Park and Pasir Ris Beach. With activities like horseback riding, fishing, biking and roller-blading, it’s bound to attract both local and expat families alike. In our increasingly urbanised city-state, that back-to-nature element is definitely a huge plus in my books. And where there are families, schools are a must – just to name a few, Coral Primary School, Parkview Primary School, Hai Sing Catholic School, Meridian Junior College, and the upcoming Singapore University of Technology & Design are all found close by. 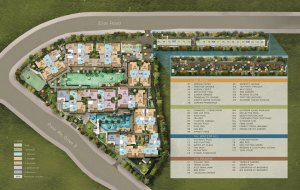 And then of course, there’s the beauty of Stratum itself. I typically shy away from residences designed by big-name architects, as I personally feel if it’s that stunning, I’d rather admire it from the outside than live in it and have people gawking at the piece of art I live in. But I would make an exception for Swan & Maclaren, the oldest architectural firm in Singapore. Doesn’t ring a bell? Try national monuments like Raffles Hotel and Goodwood Park Hotel, or for a more contemporary example, our National Library. Take a look at the artist impressions and site plan for Stratum and you’ll be able to witness the timeless charm that the architects have created here. This is a classic tropical paradise residents can truly look forward to coming home to, year after year, decade upon decade.

The sprawling grounds of over 250,000 square feet will be home to only 380 privileged households. For the sake of comparison, let me contrast that with the much smaller 152,000 square foot Oasis @ Elias nearby, which will similarly yield 388 units. The 14 blocks of 5-storeys (the only low-rise development in Pasir Ris, from what I understand.) are ensconced within lush, resort-like landscaping, complete with full condo facilities with an extra touch of luxe. Luxurious details I especially liked include the grand entrance foyer, single-storey basement parking, the reflective pool atop the gym’s glass ceiling, and the lovely floating cabanas and the sun and pool beds surrounding the huge 50m by 12m main pool and smaller 30m by 9m pool. I also found it rather interesting that most of the suites and 1-bedroom units are found within the same area, that is blocks 98, 102, 104 and 106. Perhaps this might facilitate the meeting of eligible bachelors and bachelorettes… the surroundings certainly create a mood for relaxation and possibly romance! The units themselves are also a class above neighbouring developments that have used laminate flooring and homogenous tiles. At Stratum, all bedrooms are timber-decked, while units of 3-bedrooms and above have matt marble flooring throughout the rest of the apartment.

Whilst I’ve yet to view the showflat or been shown the floor plans for Stratum, the only seemingly negative feedback I’ve had from fellow agents thus far has been that the bedrooms are a tad small. I don’t see this as a huge concern in itself. When it came to rebuilding our current home, we had the luxury of designing our own layout (incidentally, our home was designed by a family friend who helms the design firm responsible for Stratum’s showflat), and we made the conscious decision to keep our children’s bedrooms small and free up more space to have a sizeable family lounge/ study area on our upper floor. Our thinking being, we’d rather encourage the kids to spend more time hanging out as a family, than holed up in their own rooms interacting with faceless persons at their personal desktops. Given the strong outdoorsy, family-vibe I’m getting from the development and its surrounding environment, I dare say home-buyers drawn to this project may share a similar mindset as mine.

If you’d like to be kept up-to-date on this project, feel free to drop me a line or email.